In the Garden : A story of transformation, determination, and LOVE

Our “boots on the ground” dynamite volunteer in Guatemala, is Dia.  She’s been a Hogar Hero for years, and went on a voluntour in January of 2017.  She fell in love with the country, and the kids, and in July of 2018 moved to Guatemala.  She met Kevin three weeks later.

Dia was in the kitchen with Fiona Biggs helping fill in for the cook on another voluntour when someone caught Kevin stealing chocolate chips (that were to be made into cookies later).  He came in and apologized and gave them back.

It turns out, he had only come to the Hogar a few days before.  At 13, Kevin had been on the streets working with gangs.  He couldn’t read or write; stealing was how he survived.  But he was sweet and humble and all was well.

Over the last couple of years, we have watched Kevin literally bloom into an enterprising young gardener.  On the Hogar’s property, there was a plot of land with some garden beds just sitting there neglected and unused. Kevin began to collect seeds from the kitchen and grow what he could, including 24 papaya tree starts!  He had no advice, almost no tools, and the soil was poor.

Fast forward to Dia meeting Ricardo, an agriculturalist who helped a group of locals start a community garden nearby.  She asked Ricardo if he could help Kevin?  He wholeheartedly agreed, and in July when travel restrictions were lifted, they went to the Hogar.

We’ve never seen Kevin so excited.  He had a team of about six other boys who wanted to help and they immediately went to work. Ricardo brought a pickaxe and some other tools and showed the boys how to turn over the soil to aerate it.  They talked to the cook about what she wanted them to grow.  Ricardo instructed Kevin and the garden team about what they needed to do before his next visit.

When Dia and Ricardo returned two weeks later, the soil was prepped and ready to go.  The boys carried ten 50 lb bags of organic fertilizer up the (very steep) hill to the garden and began incorporating it into the soil.  Ricardo brought seeds and seedlings, as well as three lime and three avocado trees.

They planted the seeds in the garden beds, and the trees on the slope below; Ricardo showed them how to keep the beds clear of weeds and pine needles.

On the third trip, he showed them how to fertilize and spray for pests with an organic pesticide he makes himself. Ricardo also showed them how to capture cilantro seeds to replant more and how to trim the celery so it grows upright.  That was the first mini-harvest, and the cook was so happy!

On the most recent voluntour, at the beginning of December, we had a little ceremony where Kevin showed us the garden, and one of the volunteers, Heather (who is a student of permaculture) presented him with some work gloves and seeds. Kevin then made a moving speech about how the garden has helped him become closer to god that had everyone in tears.  (Translated video coming soon!)  It doesn’t get much better than that!

This is obviously an ongoing project.  The owner of an organic farm outside of Antigua has offered several banana trees which Dia and Ricardo will deliver after Christmas thus completing the plan for the orchard with four papaya trees (started from seed by Kevin), three lime trees, and three avocado trees.  Stay tuned for updates from the Hogar garden! 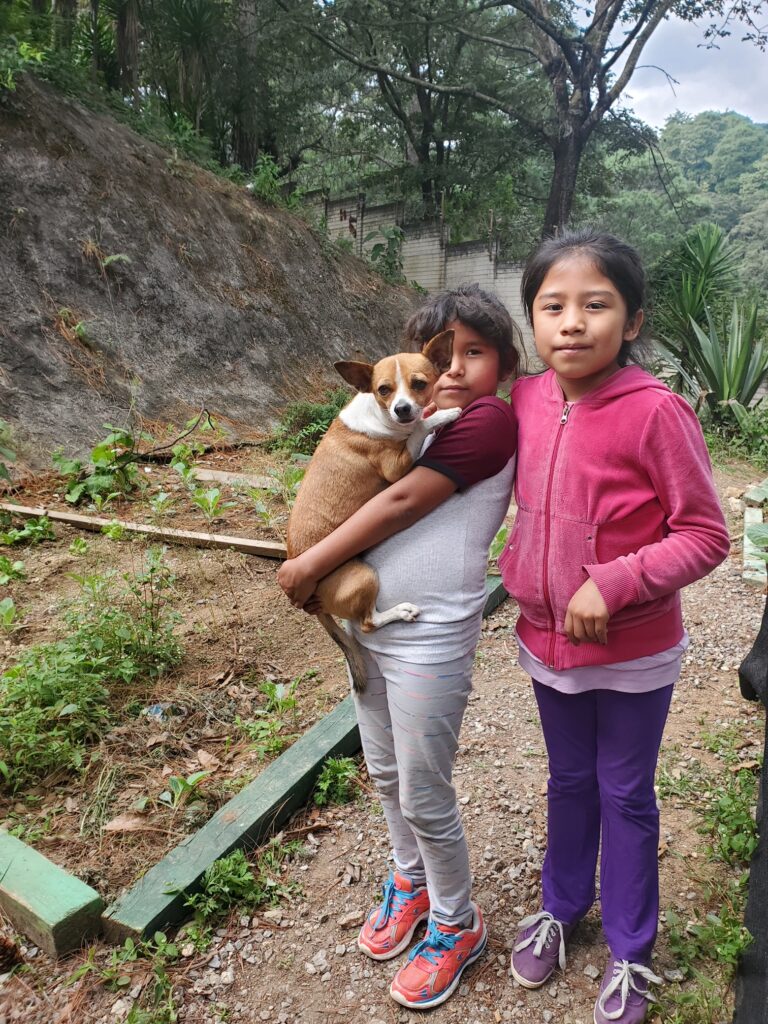